“The easiest way to the meeting space is to just go through the chapel,” she said, directing me with a wave of her arm off to the right. As I walked toward the doors, they opened as if by magic, silently sliding open by some unseen force. They were 10-foot-high with a single 12” vertical bar on each one. Beside each handle, was a narrow window, allowing outsiders just a glimpse of the sacred space inside. As I stepped through the doors, I wondered if anyone had ever touched those door handles.

As the cool air from the chapel fanned my face, the odorless space opened before me. To the right was a simply edited receiving area, a beautiful glass sculpture sat upon a small table in front of a couple of conversation chairs. The soft lighting was placed strategically throughout the space, with elegant up lighting capturing the glimmer of tasteful wall décor and other design highlights.

The wall delineating the receiving area angled out from the right, clearly intended to direct your eye toward the main chapel area. I mindlessly allowed my vision to be funneled into the reveal of the Great Room as I passed through the entryway. It wasn’t until then, when it was too late, that I noticed I had been triggered long before I had even spoke to the young woman at the front desk.

My entire body felt a visceral reaction to the main chapel area suddenly encompassing my view. Its altar area was simple and beautiful, in keeping with the design of the entryway. Groups of long, narrow lights, matching the brushed nickel finish of the door handles, illuminated the space. They pulled my eyes up to the full expanse of the 25-foot vaulted ceiling; soft light streamed down from windows in the peak. To the left of center, a series of asymmetrical block windows full of cobalt blue stained-glass drew my eye back down to the sanctuary. The all-encompassing space hit me with a force that made me rock back on my heels. I took a small step to regain my balance as my being reacted to the terrifically powerful flashbacks I was experiencing.

Even in my slightly dissociative state however, a part of me held on to something different. Yes, parts of my mind were reeling—warning sirens sounding in my brain for me to flee, my heart beginning to race faster, pumping blood to my legs in preparation for running, my breath quickening to shallow gasps, my left shoulder began to tighten and cramp and my eyes narrowed to better focus on any potential hidden threats—but there was a part of me that had dug in and stood firm on some unseen solid foundation of assurance. It was with this part that I noticed the difference between this chapel and every other sanctuary that was flashing through my mind like a flipbook of memories—the seats of this sacred space were facing each other.

Two groups of seats arranged in concentric ovals radiated out from a central open area where I assume the person delivering the message would wander while they spoke. Yes, this was a different space, one dominated by the feminine side of the Church. As I looked at the chapel in all its majesty, the five or so rows of seats on either side of the speaking area resembled hands held up to a mouth as if magnifying the message shared from the floor.

I took this scene in as I walked through the back of the chapel. In a matter of a few seconds, hundreds of thoughts, feelings, and sensations coursed through my body. But I wasn’t here for the chapel, and so I continued along what the woman at the front desk had mistakenly called “the easiest way” to my destination.

“Let me take you away,” she whispered in my ear as the familiar cramping, twisting pain in my left shoulder intensified. It was Tali—the part of me I had identified only two weeks before, yet had been with me since I was 8 years old.

“We are here for a reason,” I half whispered in an attempt to calm the voices that had started to scream at me in my mind. As I reminded myself that I was safe here, that I could leave at any time, that at any moment when I felt uncomfortable I just needed to squeeze the pressure point on my left hand in order to begin to ground myself in the reality of inner safety, the doors on the opposite side of the entryway opened as magically as the ones I had entered through.

It was a statement that rang true in every fiber of my being. I had been invited to speak on a panel along with four others, but I knew I was a last-minute addition after the organizer had asked several other more appropriate candidates. If she only knew how timely her request was, I thought, I wonder if she would still have asked?

“But I chose to come, and I can leave at any time,” I again assured myself, hoping I would believe it enough for Tali’s claws to release their god-forsaken grip on my left shoulder. While I had learned enough about her to realize she was a part of me who wished to protect, to snatch me away from danger, her presence was excruciating.

As I stepped through the doors opposite the receiving area and towards the meeting hall, the chapel doors closed silently behind me. For the moment, the claws eased their grip. There would be several times over the next hour where she would make her presence known—a well-intentioned reference about how a woman came to realize a transgender child was “just like everyone else,” a comment that LGBTQ people needed to “be patient with the Church because change was slow,” and several glances which were uninterpretable. The predominant mood of the thirty or so women who had come to hear us speak however, was hospitable, warm, and loving.

As panelists, we were asked to share the strengths, needs, and hopes of the local LGBTQ+ community. I was able to share some perspective about the profoundly negative impact “The Church” has sentenced upon many of those who aren’t heterosexual or cisgender (those who agree with the gender they were assigned at birth) who had passed through. I was able to say, hopefully with a gentle firmness, that while change does take time, people were literally dying while the Church moved forward at a snail’s pace—they had to choose to either sit back passively and wait, or to be agents of healing and hope. To my surprise, they generally responded with humility and acceptance, pressing into the pain, wanting to learn more.

The women’s hands extended kindness that felt genuine as they greeted us afterward. They would allow their gaze to linger, unafraid to make eye contact with me, and let me remain in their space for as long as I wanted. I appreciated the presence of the other panelists, all of whom I knew, some of who have walked through dark times with me. The space, the aura of community and hospitality radiating from the women and knowing there were friends close by created an atmosphere that reminded me of one of the happier times of my childhood—gathering at our neighbor’s home for her “family of choice” parties.

Although I have barely scratched the surface of my own healing from religiously induced trauma, or maybe because I’ve recently gathered enough strength to mentally approach the vault where I’ve locked away most of those memories, opportunities to speak about the Church’s role and responsibility in queer people’s lives seem to be surfacing left and right. I consider this to be both a privilege and a responsibility. I had assumed I would need to navigate this treacherous territory of my past at some point along my journey, but now that it is here, I hesitate like I did when I found myself reeling from the presence of the chapel. 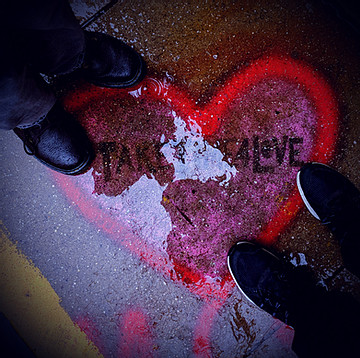 As I’m writing this now, I’m realizing that perhaps it is in the midst of community, friendship, and love where I will find healing from some of these deep, infected wounds that I’ve held onto for almost 40 years.